Even now, over 2000 years later, the country’s vast collection of wines is still improving.

The responsible, professional wineries consistently deliver quality. On our webshop you can choose from over 30 Macedonian wines from the wineries Stobi and Tikves.

By clicking on the “additional info” section you get to know more about the specific wine.

Here is some more information about Macedonian wines and their history.

Visiting one of the oldest wine countries in the world.

The wine history of Macedonia goes back to far before our era. The oldest archaeological finds in the neighborhood of Negotino are from the 13th century BC.

Alexander the Great, the most famous Macedonian ever, was a great enthusiast and liked to take a few barrels with him on his travels.

Even in Roman times the region which is currently Macedonia, was an important wine region. Slavic people who colonised the region in the 7th century took the reins.  Centuries later, when the region was occupied by the Turks, the monasteries continued to produce wine.

In the second half of the 20th century, viticulture experienced strong growth. All family businesses were nationalized by the state and transformed into 13 large state-owned companies. 30,000 families each received a small piece of vineyard. They were obligated to sell their produce to the state-owned enterprises which subsequently used their grapes to make wine. Bulk wine was often transported to other countries and bottled there!

The production increased considerably in the former Yugoslav province, which developed itself to one of the most important wine suppliers for a major part of the Balkan and Eastern Europe.

Much has changed since the end of the 20th century. The state-owned companies have once again been privatised and modernised. The numerous and split small plots of land are being bought up and converted to professional vineyards.

Currently, the Macedonian wine sector consists of nearly 90 companies, as opposed the mere 30 wineries which existed in 2003.

Today Macedonia is rediscovered as a wine country, with its vast tradition and various indigenous grapes, such as Vranec, Kratosja …

The vineyards are located in the region of Poverdarie in the rolling valley of the Vardar river. Povardaria has hot summers and a long autumn. ‘At night there is a cold wind blowing through the valley which cools everything down again, causing the grapes not to shrivel due to the heat making viticulture possible. 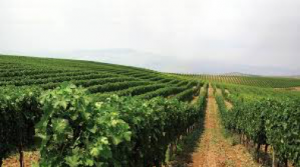 The Vranec is a blue grape and the primary indigenous species. This gives ink-red, concentrated wines with similar tannins.

As far as the white grapes are concerned, Macedonia offers the classics such as the Chardonnay, Saugignon Blanc and Traminer, but also a number of local variants, such as the Smederevka, Zilavka and Zupjanka are processed into delicious wines.

The ever increasing rate at which wineries are investing en modernising continuously raises the quality standard of the entire sector. Macedonian winemakers are eager to spread their local pride far beyond the national borders, yet at this moment only the major Macedonian wineries are succeeding in this endeavour.

The cause of this problem is that Macedonian wine in the west is unknown causing it to have little appeal.

The rising tourism to this old culturally rich country should allow its beautiful nature and hard working citizens to solidify the reputation of its locally produced wines.

By appealing to French consultants, such as Mr. Philippe Cambie and investing in French oak barrels, the quality of the wine is improving. As a result, Macedonian wine is gaining more and more prizes at international wine competitions.

Even international wine expert Mr. Robert M. Parker gives 4 of the wines we offer through our webshop from 90 to 95/100.

This result ranks our selection among the 5% best wines in the world. Judging by the numbers and recent experience, the image problem could be resolved faster than any of us could fathom.

best wine, one of the oldest wine countries, unknown is not loved
Share
Print page
0 Likes